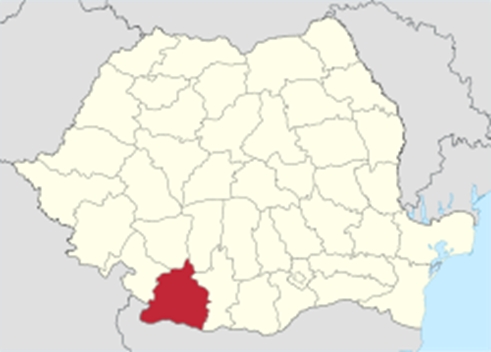 Dolj is a county situated in the south-west part of the historical province Oltenia в Romania. The county is in the most fertile territory of the Romanian Plain. Its territory covers a square area of 7414 km. to the south, Dolj county has the river Danube as its natural border to a length of 150 km. as to infrastructure, Dolj has two Danubian ports – Becket and Calafat, a railway network to dimensions of 225 km and a population of 660 000 people.

HISTORY OF THE REGION OF DOLJ

The first documented evidence about the region of Dolj dates back to 1444 where the county is mentioned under the name of Județul de Balta, located in the Danubian Plain, spanning from Blahnitsa Swamp, nowadays in the territory of Mehedinţi county next to present-day rural municipality of Bistrets in Dolj. The name Dolj comes from the Slavonic language – Dole = Lower, to which Jiy is added and we have Doljiy meaning Lower Jiu.

Dolj is a county in the province of Oltenia. It is the historical western border areas of Wallachia (the other one is Muntenia). The tern appeared as a result of the clauses of Pozharevski Peace Treaty by which, this part of Wallachia was separated and given in possession of the Holy Roman Empire (the Austrian Empire). In 1737, together with the Sanjak of Smederevo /that was returned to the Ottoman Empire/, the integrity of Wallachia and the previous status quo between the Sublime Porte and the Austrian Habsburg house were restored.

The province borders Transylvania to the north Banat to the west, to the south, it is limited by Moesia with the Danube and it is conditionally separated from Muntenia by the river Olt. In terms of administration, Oltenia is divided into two counties – Gorj and Dolj with main city Craiova.

Oltenia is said to be the land of haidouks.

In Oltenia (the actual land of haidouts), they appeared earliest, after 1560 and are related to the name of Baba Novak, later on – with the legendary Gruya Novak (one of their sons), with Yoergy Yorgovan. Haidouk movement grew rapidly turning into fashion during the Austrial occupation until the end of the revolution of Tudor Vladimiresku.