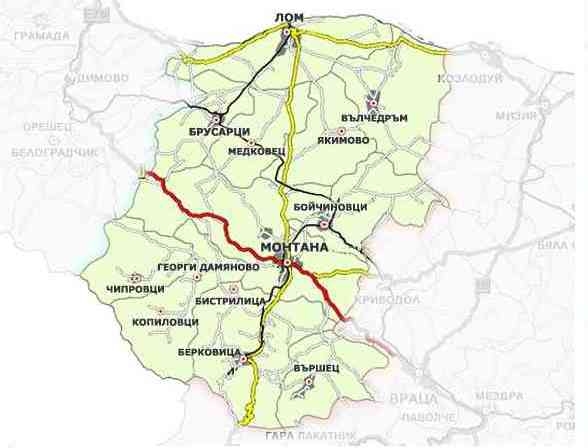 Montana province occupies the central part of north-west Bulgaria to an area of 3 635 sq. km. which is 3,2 % of the territory of the Republic of Bulgaria. The northern border of the province is the Danube river which is also the state border with Romania. To the southwest, the province borders on Serbia, to the south, it is limited by the northern slopes of the Balkan mountains. The neighbouring province to the west is Vidin and to the east – Vratsa, to the south – Sofia province.

An important advantage of the province related to its location is the fact that two European transport corridors of TINA network run through its territory – corridor No 4 (road Е 79) Vidin-Montana-Vratsa-Sofia-Kulata (Republican road (РП) І-1) и corridor No 7 (the river Danube). The territory of Montana province also houses the route of the shortest road from Vidin to Sofia – second-class road ІІ – 81 through the Balkan pass Petrohan which services Lom port ensuring for it a connection with Thessaloniki port. These factors may have a stimulating impact on the total development of industry, agriculture, trade and tourism in the province.

HISTORY OF THE CITY OF MONTANA

The first name of the city given to it by Romans was Montanesium. The Slavonic tribes gave the city the Slavonic name Kutlovitsa. During the Turkish reign, it was called Golyama Kutlovitsa.

In 1891, Golyama Kutlovitsa was renamed Ferdinand earning by this gesture the benevolence of Knyaz Ferdinand I and obtaining the status of city.

In 1945, the government of Fatherland Front renamed the city to Mihaylovgrad after the name of the communist figure Hristo Mihaylov who had worked in the organization of the Bulgarian Communist Party and took part in September Riot in the city and then died in 1944.

In 1993, a decree of the President Zhelyu Zhelev changed the name of the city to Montana (after its ancient name Municipio Montanensium).