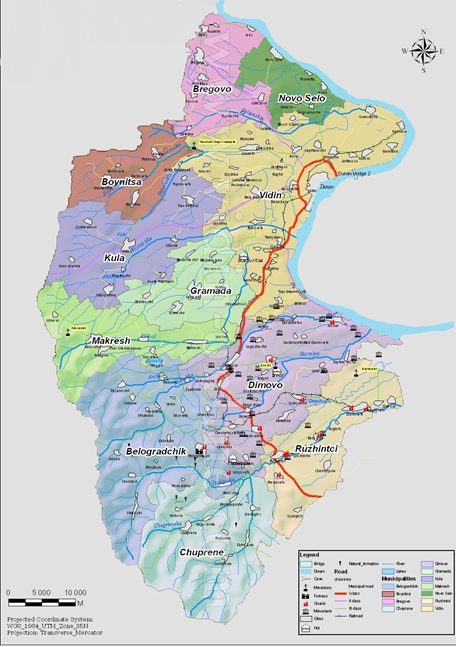 Vidin province is situated in the north-west part of Bulgaria and covers an area of 3 032.9 sq. km. Which is 2.73% of the territory of the Republic of Bulgaria. The geographic location of province has facilitated its development as a transport, commercial, cultural and political center for centuries.

Vidin province is the entrance-exit gate of the Republic of Bulgaria for Europe and the world. To the north, it borders with the Republic of Romania, to the west, its neighbor is the Republic of Serbia, to the south, it is enclosed by the Balkan mountain, and to the east – it borders Montana province. The natural norther border – the Danube river enables direct connections with all countries of the Danube basin.

The province involves vast areas of various relief. The spacious riverside plains – Vidin and Archaro-Orsoyska are some of the most fertile lands turned into cultivated areas.

The town of Vidin was established in ancient times. In the contemporary quarter of the city of Vidin Kaleto, finds from the Thracian period were discovered and were dated from VI c. B.C. There is information that in III c. B.C., the city was inhabited by Celts and was called Dunonia. Later on, Romans called the city with the name of Bononia and the Bulgarians called in Bdin (relating it to the verb “bdya” [stay on guard]). In the time of Roman Empire, it was among the major cities of the Upper Moesia Province encompassing lands from nowadays North-west Bulgaria and Eastern Serbia.

During the Second Bulgarian Kingdom, Tsar Ivan Aleksandar assigned the control of Vidin Despot Unit to his son from his first wife – the Wallachian Teodora Basarab, Ivan Sratsimir and crowned him tsar who separated from Tarnovo Tsardom and established Bdin (Vidin) Tsardom that was later on conquered by the Osman Turks.

In 1444, Vidin was besieged by Vladislav Varnenchik and in 17 and 18 century, it was conquered by Austians, attacked by Hungarians and Romanians.

In 1738, the population in Vidin was mainly Turkish. For some time, is was in fact managed independently when Osmal Pazvantoglu was the ruler of Vidin region – from 1798 until 1807.

The siege of Vidin during the Serbian-Bulgarian War of 1885 ended with success for Bulgarian who defeated all attacks of the Serbian army.